As far as home improvements go, sex rooms are not generally considered smart financial investments. What future buyer would want anything to do with someone else’s adults-only romper room?

But practical considerations did not deter Brody Danger, an artist’s manager by day and burlesque drag dancer by night, from appearing on the new Netflix home renovation show, “How to Build a Sex Room,” which premiered July 8.

“My favorite thing about getting older is you stop caring what people think,” said Mx. Danger, 31, whose mother, a real estate agent, strongly advised against embarking on such a specialized project. “You’re the ones that are living in it now.”

Mx. Danger, who lives in Denver with their partner, Bettie Belladonna, 40, also a burlesque performer, transformed part of their 800-square-foot basement into a classic Hollywood glam-style dressing room, with an oversized soaker tub in the middle of the room, along with a small stage and runway.

The couple, who use their stage names socially and for this article, say the room is now their favorite in the house. On Thanksgiving, they hosted a party of 10 there. The guests were duly impressed to get to eat dinner in a room with door handles shaped like naked women. “I like to think there was a hefty amount of jealousy,” Mx. Danger said.

There was at least some curiosity. Ms. Belladonna, who works in hospitality, recalled guests “fondling the sex toys on the wall.”

“It was an amazing night and I think it was because of the room that added this element of love,” she said.

“How to Build a Sex Room” follows a dozen couples as they transform bedrooms, basements and spare rooms into spaces where they can rediscover some intimacy and indulge sexual fantasies. The host, a white-haired British designer named Melanie Rose, titillates her clients with a handbag full of floggers, handcuffs and other toys, nudging them to envision their own “Fifty Shades of Grey” playroom.

Ms. Rose, who lives in Los Angeles, has garnered a reputation as the Mary Poppins of sex rooms. (For those in search of euphemisms, she also calls them “sacred spaces” or “fantasy rooms.”) So she makes for an obvious addition to the Netflix lineup. The streaming network has been angling to corner the self-care niche of the home-improvement genre with shows like “Get Organized With the Home Edit” and “Queer Eye,” two shows that attempt to solve personal problems with practical fixes. “How to Build a Sex Room” is the next iteration of that concept. Ms. Rose peppers the homeowners with questions about their most intimate fantasies, encouraging them to lean into design changes that please no one but the two people sitting in front of her.

The result is a show that hews to the HGTV script, but with a twist. The guests present a design challenge and Ms. Rose sets out to solve it. The show is not short on sledgehammers, Sheetrock and plumbing problems. There are vision boards, replete with graphics, renderings and gushing descriptions of textured wallpaper and shower tiles. And there’s an affable plaid-clad contractor named Mike who’s up for testing the new leg restraints on a bed. It all ends with a big reveal and tears as the happy couple relish the transformation.

“We’re going to make great use of this room,” said one guest, after she explored her new leather and neon retreat with a spanking bench and bondage cross, accessible by a ladder hidden beneath floorboards emblazoned with the warning, “Caution: adults at play.”

At the center of the home renovation genre lies a mantra: Improvements should not just improve your life, but your property value. Kitchens and bathrooms should be designed with a future homeowner in mind, one who would be willing to pay a hefty sum for the Instagrammable space.

“How to Build a Sex Room” challenges the dogma. Forget the open house, this is about what happens behind closed doors. Instead of ending up with a farmhouse sink and Edison bulbs, you get couples sprawled on a tufted sofa, their legs flung over one another, fawning about their newly improved love life. You get rooms with floor-to-ceiling mirrors and chains hung from the ceilings. Unlike the anonymous, interchangeable couples you typically see on home improvement shows, these ones bare all, revealing details about their lives that most people would not even share with their closest friends, let alone the viewing public.

Sex rooms are not particularly cheap. Ms. Rose estimated the renovations on the show ranged from around $30,000 to $70,000, although the homeowners did not foot the bill. (The production company, High Noon Entertainment, paid for the work.) Some of the renovations Ms. Rose has done privately cost upward of $200,000. But she sees it as a worthy investment.

The bedroom “absolutely should be the first place” homeowners renovate, Ms. Rose told me. “Because that’s the place where we, as a couple, as partners, we sleep together, that’s where we have sex. That’s where we start our families. So why not make it more romantic?”

Shenika and Matthew Carter saw their renovation project as one that could potentially save their marriage — a tall order for a home-improvement show. “The love was there, that was no doubt,” said Ms. Carter, 41, the chief executive of the Urban League of Metropolitan Denver. “We couldn’t figure out why there was a lack of intimacy.”

The couple, who bought the five-bedroom home in 2019, had made significant improvements — renovating the basement, customizing the deck and updating the backyard. “We were creating all this stuff for the kids,” Ms. Carter said. “We did everything imaginable to give it that home feel, but there was nothing for me and Matthew.”

So their bedroom was an afterthought, with two televisions, a hulking four-poster bed and laundry strewn across the floor. Their 5-year-old daughter often slept in the room, while Ms. Carter frequently fell asleep in the living room — hardly a recipe for romance.

Ms. Rose gutted the bedroom and the adjoining bathroom, changing the layout so Mr. Carter, 38, who owns a truck-driving academy with his wife, can now watch her shower from the bed. They also added a stripper pole to the middle of the bedroom. “I’m from Atlanta, home of the strip clubs,” Ms. Carter said. When she dances on the pole, “I’m in Atlanta in Denver.”

Their favorite addition, however, is the thumbprint-activated lock they added to the bedroom door. The family bed is a thing of the past. “That was a reckoning, putting that knob on that door,” Ms. Carter said.

Now the bedroom is the couple’s favorite destination. Each night after family dinner, homework, chores and bedtime routines, they retreat to their retreat, enjoying the improvements they made to satisfy no one but each other.

Sun Jul 17 , 2022
Fernanda Marques Arquitetos Associados is behind this jaw-dropping design, where the client requested a swimming pool *inside* his apartment in Brazil. The glass-enclosed pool offers a focal point and lots of entertainment for those hanging out in the double-height living room. Photo: © Dusit International While leaning towards the minimalist […] 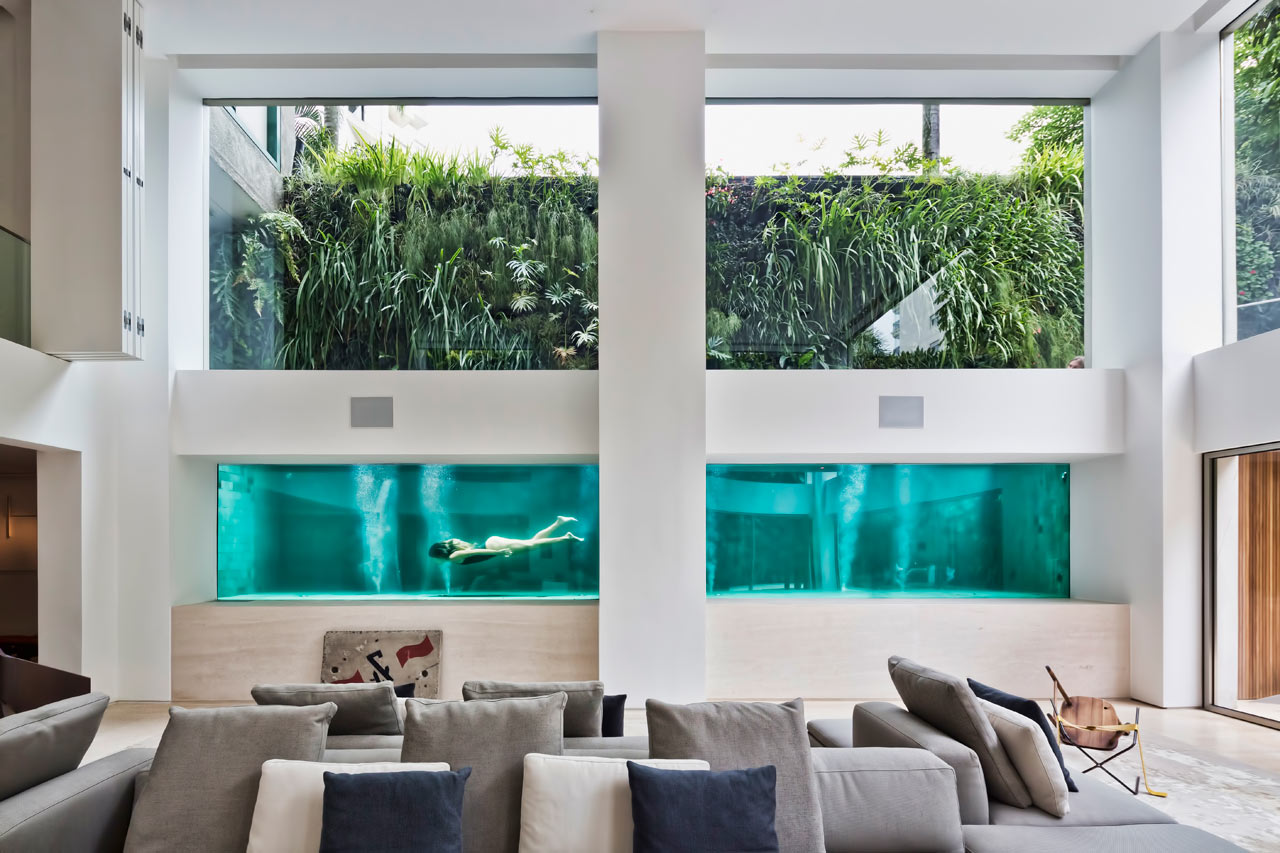